The weather throughout the year 2016 has not always been easy, it is the opposite of the vintage 2015.

Following a very rainy spring, the vines were extremely exposed to pressure from the blight, makes us more vigilant since winemakers in agriculture have not the same means of struggle than the conventional winemakers (our products are so-called “of contact” and are only placed on the foliage or the Bay, causing a shorter in case of heavy rain). This excess water also made it our more difficult floor care, to add light damage of freezing on some plots.

A from the month of June the climate is completely reversed, and temperatures are spread on the rise. We regularly identified temperatures of 37-38° C added to a very low rainfall until mid-September. This phenomenon has led a blocking of maturity in several plots (especially Châtenois and Scherwiller) as well as a bad lifting of sowing in April (the seeds are burned by drought). Seedlings that we do in our vineyards have aimed to improve the soil structure and still make a little more life.

The harvest of Crémant began on 15 September and took place over two days as the wines were waiting. We headed no doubt on a vintage that was going to wait, while the last years had been earlier. We started on 27 September to harvest the grapes that ripen more quickly. Quality is at the rendezvous since the picked grapes were very healthy (which prompted us to propose two new nature vintages with the Frauenberg and Riesling Nature). It took, however, adapt our program based on each parcel and its state of progress given the heterogeneity of the maturities. This phenomenon did coach the harvest in length but the game was worth the candle.

Indeed, the grapes themselves tasted very well: with maturity, combined with a relatively pronounced acidity which announces a long keeping vintage.

Gustatively, wine took a while to open. It took 8 months on the Lees so that they are willing to point the tip of their nose. Today, we find complex wines with a lot of matter and freshness in the mouth. There is no doubt that it will indeed be a long keeping vintage. 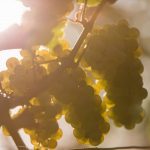